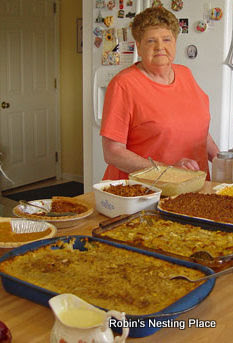 Almost eight weeks ago my precious mother went to the hospital for diverticulitis. They treated it for nine days with antibiotics with no success. They did emergency surgery taking a foot of her colon and gave her a colostomy. Because she was a diabetic and had been on Prednisone for almost twenty years, her wound never healed. During her fifth week in the hospital they overdosed her on Morphine giving her 20 mg in four hours. When they discovered their error, they flushed her with fluids so fast they caused her to develop pneumonia. She also got VRE which is a hospital acquired Vancomycin resistant staph infection along with e-coli and Peritonitis. She didn't want to die and fought so hard to overcome all of these obstacles, but she eventually succumbed to the pneumonia that filled her lungs. On Thursday, June 24, my sweet mother passed away.

After seeing her suffer in agonizing pain for weeks on end, it was a relief to the family to finally see her at rest. Because she was a Christian, we know that she is in a better place and we are comforted in that knowledge.

It is still so hard for me to even comprehend this. We have been preparing ourselves for my mother-in-law's death. She is in end stage Alzheimer's and only weighs 73 pounds. I can hardly believe that she has outlived my own mother, who was only 67 years old.

Please keep our family in your prayers. My dad had major lung cancer surgery last year. He is still in a lot of pain, especially after staying at the hospital day and night for so many weeks. He is exhausted and also dealing with anger towards the hospital for the many errors they made that sabotaged my moms health and we believe killed her. He will have many adjustments learning to live without my mom.
Posted by Robin's Nesting Place at 11:26 AM 52 comments: