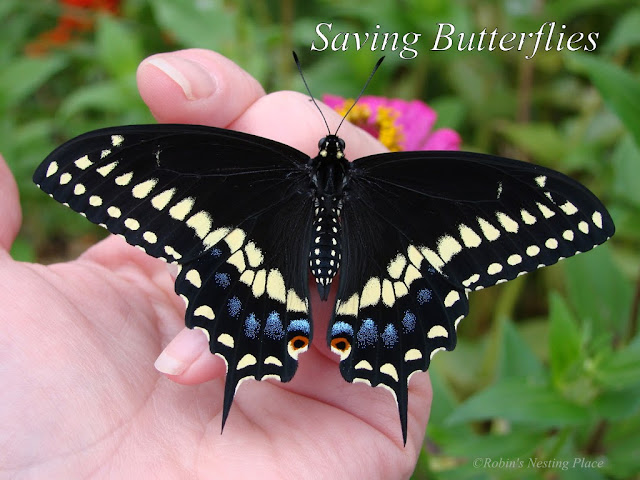 When my children were young I started planting parsley so we could attract black swallowtail butterflies to our garden. We would gather the eggs and tiny caterpillars and bring them inside and watch the amazing metamorphosis. It never thrilled them as much as it did me! Even though the children are grown I still bring caterpillars inside to watch the amazing transformation from egg to butterfly. A new butterfly is a beautiful thing to behold.

This winter I grew my dill and parsley from seed in anticipation of this summer tradition. 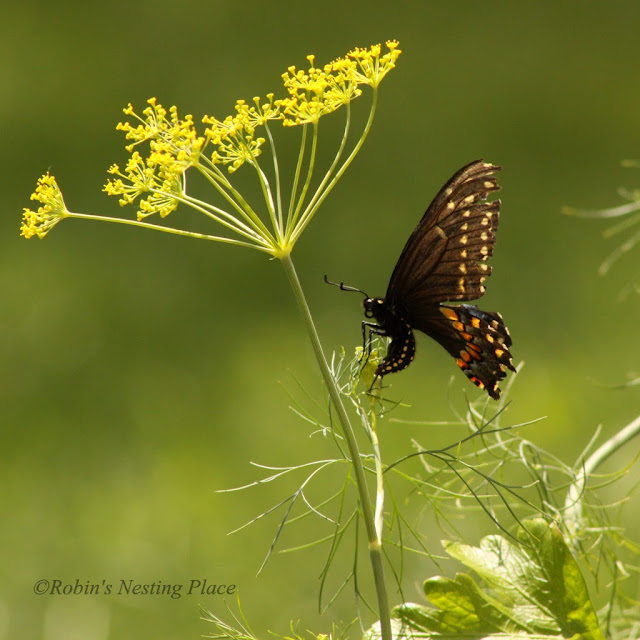 Around the end of May, I was delighted to see the first butterfly of the season laying eggs on the dill. Every day I checked the parsley and dill to see if there were any caterpillars. 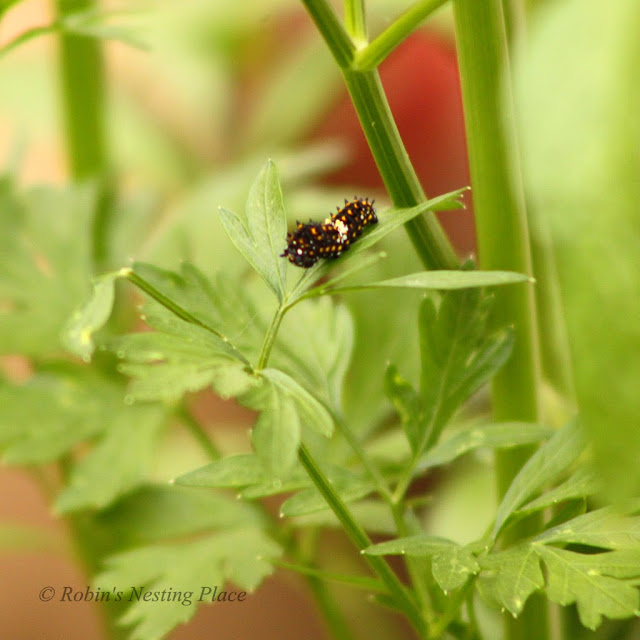 It wasn't long before the eggs hatched and the plants were covered with caterpillars! Since the butterfly host plants were on the patio, I decided to leave them alone this year and watch them outside.

One morning when I checked on the caterpillars, they were almost all gone. I carefully looked over the plants and discovered what had eaten them. 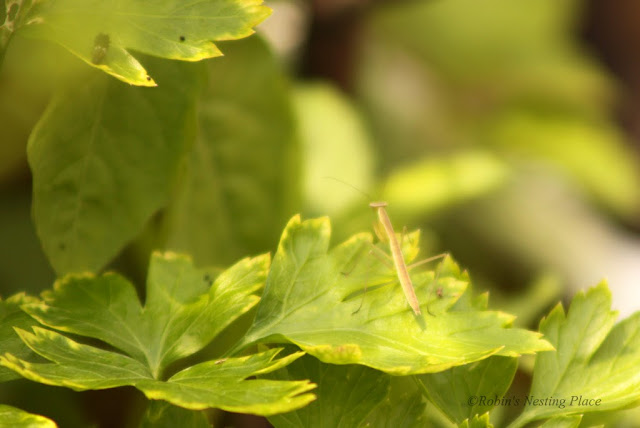 A baby praying mantis was feasting on my caterpillars! I was so disappointed! 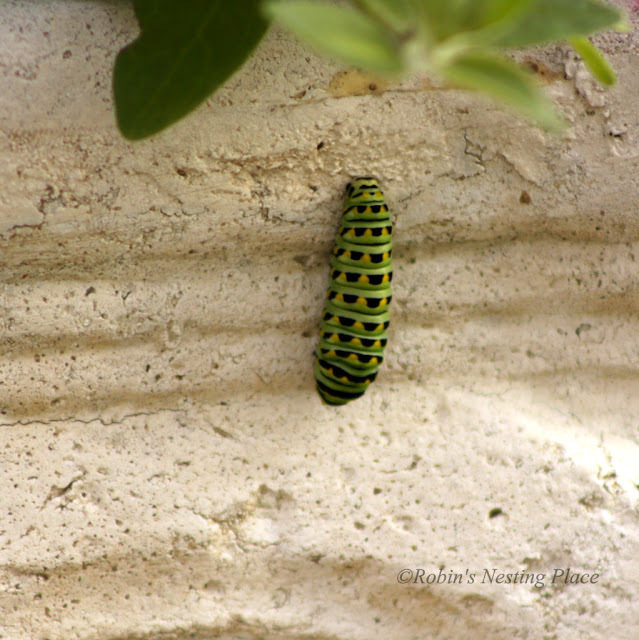 Only four caterpillars were left. This one attached itself to the side of a planter so I left it outside. The other three were smaller so I brought them inside. 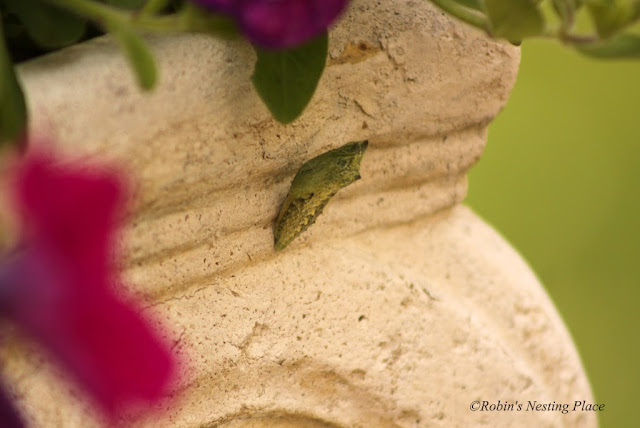 I thought this one would be safe outside but a few days later I noticed it too was gone. I saw a male cardinal searching for food around the parsley and dill, so I think this one was fed to baby cardinals.

For the last few summers I have not seen many butterflies, so losing all of these caterpillars caused me to do a bit of brainstorming to try to find a solution to save more of the butterflies. I found a large plastic container that I covered with a screen but the cat was way too interested in the moving caterpillars to keep them safe inside.

A few weeks ago while at Goodwill, I saw this rolling cart for $5.00. I thought maybe it had potential for my butterfly project. 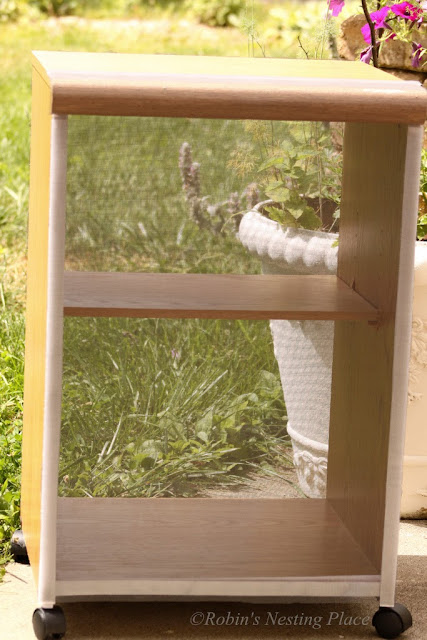 I removed the back and stapled fiberglass screen to it. I needed something removable for the front, so I used some of my husband's heavy duty velcro. It was sticky enough to attach firmly to the screen. 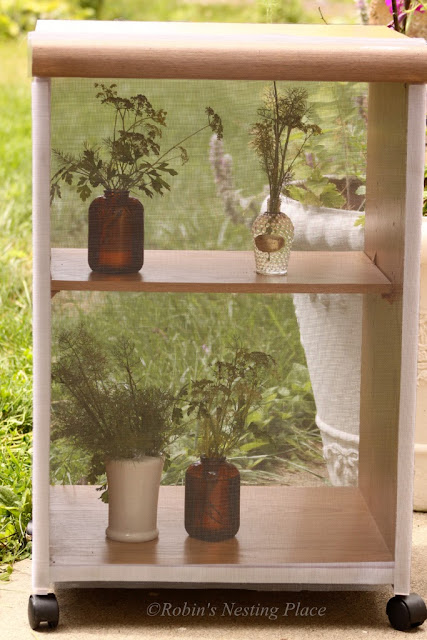 It is just a temporary solution until I can build or find something similar that will be more substantial and hold up to the weather. For now it works great and is exactly what I wanted! 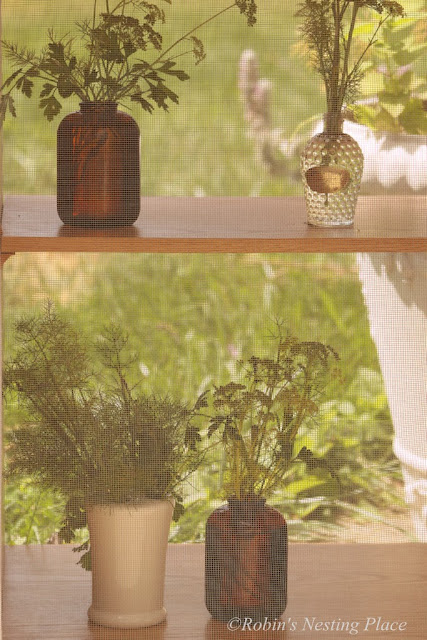 I counted twenty-two caterpillars this morning! Hopefully they will all survive and the garden will be full of black swallowtails!

I'm keeping a close eye on the milkweed and if I see a monarch caterpillar, I'll place it in the enclosure too!