Surprise on the Front Porch 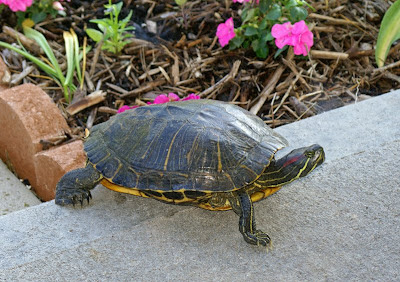 We had a surprise on our front porch this morning. When my son opened the door he saw the turtle and called for me to come with my camera. This turtle was moving around pretty fast and my son called him "Zippy". 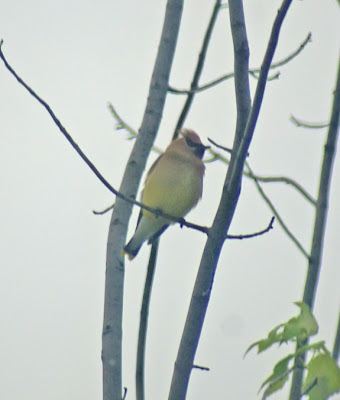 Another surprise for me this past week was a visit from a cedar waxwing. I had spotted a bird with a tuft of feathers on its head and couldn't identify it because I couldn't see it well enough. I thought it was too large for a tufted titmouse. A couple of days later, I looked out the kitchen window and saw it again in a backyard tree. It was very cloudy and I still couldn't see it well. It wasn't until I edited the picture with Adobe Photoshop that I was able to see that it was a cedar waxwing. I had a large group of these birds in Alabama and thought they always traveled in groups. I didn't see any others with this one. 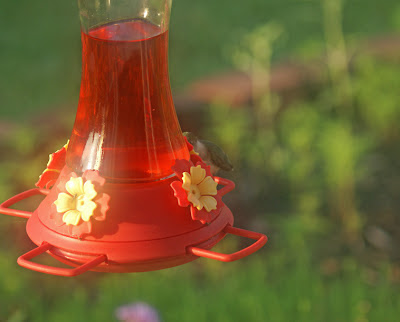 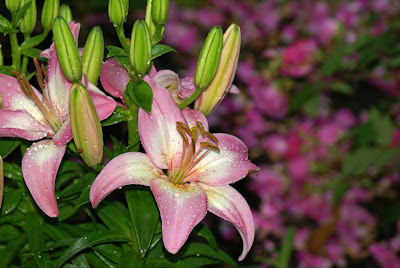 The lilies are blooming right now and are so beautiful. I bought this one on clearance last year and it is quite large with several blooms and quite a few buds. I love the colors on it! 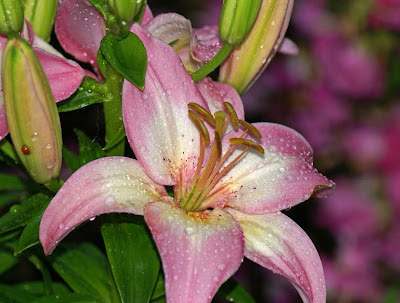 OMG a red ear turtle on your porch. How funny. I wonder if it was going to lay its eggs in your mulch or if it was just lost. Do you have a pond nearby where they live?

Your garden is a beehive of activity with the hummers, waxwings and turtles. The beautiful flowers are a big draw to them no doubt.

WOW! Zippy is quite the guy! What a great surprise to find. :c)
Love your beautiful waxwing and lilies Robin.

Isn't that funny! What a neat surprise though. Good job on the waxwing-it shows very well now. What is the name of the lilies. They are a pretty color...and I like the rain drops on them. Makes them look so fresh and inviting.

Fabulous wildlife sightings. I have never seen a cedar waxwing--that I know of. They are supposed to be around here, but I'll be darned if I have seen on.

We did see a teeny tiny turtle, about 1" long the other day. We just barely missed stepping on him!

I've seen those Cedar Waxwings during hikes in the Smoky Mountains. Very nice birds. My parents had a few that flitted around their house for a couple days last summer. I don't think they've returned though.

Your lillies and peons are gorgeous!

Beautiful lilies--I love anything pink! The hummingbirds have finally arrived at my house, but every time they come to feed I am without my camera, too.
Your peonies are absolutely gorgeous!
I've been reading about the storms near Indianapolis; I do hope they missed you.

We used to have a turtle visit the compost area...he has a strange mark so I knew it was him...

Don't you love fall clearances, you can get the best plants for such a good price. They are a good pink!

My boys would have had a time with a turtle on the front porch. There would have been begging to keep it. Your garden sounds like a very critter friendly place.

I recognize that turtle. Tell your son he was in NC on Friday--now that is fast;)
Anna..FGG

I enjoyed your nature shots, I am still trying to catch the hummingbirds on film, they are fast, and noisy, and elusive!

The color of your lillies is lovely. Mine are starting to bloom too.

Lots of wildlife in your garden, I see. Is that a red-eared slider turtle? He's pretty cute.

I know you will have many more hummingbird pictures, and I look forward to every one, Robin.

Tell your son that the turtle is back down here in NC again;)
Anna..FGG

Your lily is blooming beautifully. I always love it when interesting wildlife decides to show up.

I helped one on these turtles across the road recently, and pointed it toward the pond it was trying to get to. Of course I took a couple of pics first :)
I've never seen a cedar waxwing here in our yard. Sure would like to.
I love the color of that pink lily. So beautiful!
The hummers are really entertaining us here. Aren't they fun to watch?