A Little Change That Makes a Big Difference

A couple of months ago I made the confession that I had never shot out of the auto mode with any of my cameras. I didn't even know how! After I made that confession, so many of you commented and said that you also shoot in the auto mode.

I took a fundamentals of photography course recently and I learned something very valuable during the first class that I want to share with you that will make a huge difference in your photography! This alone was worth the price of the class to me!

On almost every camera, (even the most basic point and shoot digital cameras), there is a "P" on the dial. This is called the Program AE Mode on my Canon, but I have the same "P" on all of my Sony cameras as well as my Panasonic. The Program mode is very similar to the Auto except that you control the "White Balance" and the "ISO" speed. The camera still automatically sets the shutter speed and the aperture.

Here are a series of photos, straight from the camera, that I've taken to show the difference in the Program and Auto modes. 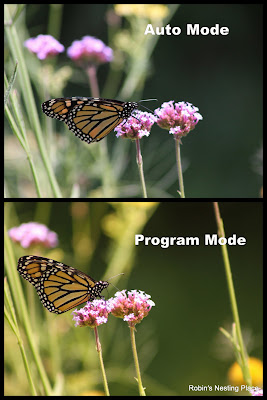 Before, when I would shoot in Auto, I had to do a lot of editing to my pictures before I could post them. Usually the color was flat and washed out so I pretty much always had to increase the saturation. A lot of times in Picasa I had to use "warmify" to give my pictures the warmth they lacked. 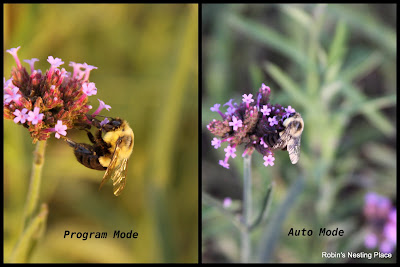 White Balance is a very easy concept to understand and most cameras have the same standard symbols. If you are taking pictures on a cloudy day, turn it to the cloud. If you are in the shade, most cameras have a house indicating shade. There is a sun for sunny days, a light bulb for indoors and usually a long battery looking thing which is standard for florescent lighting. I don't know why but the term "white balance" intimidated me. There really is nothing complicated about it, once you locate it on the camera menu and learn to change it. 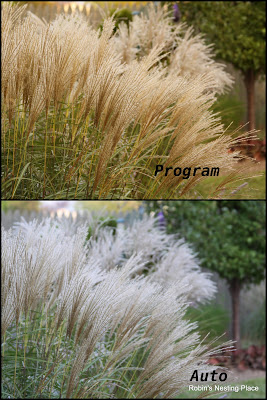 ISO sounds intimidating too, but just remember back to the days when we had to buy film. I usually bought 200 speed film which was great for shooting outdoors. For indoor situations you needed a higher speed film. For digital cameras the ISO works the same way, you have to increase the speed for lower light situations. What a huge difference it makes just going from auto to program! I can't believe that I didn't already know about this! 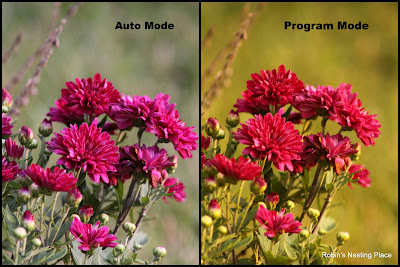 Remember me telling you about the first night in class when I told my instructor that Auto was my friend and he quipped, "it's a stupid friend"? Well this is exactly why he said that. He knew something very important that I didn't know. Auto white balance is the stupid factor.
Posted by Robin's Nesting Place at 11:15 PM

great article. i normally shot with my canon power shot 570IS auto mode. But in scene mode i choose foliage and then i can adjust for ISO as well. The macro mode is also great feature. You have done a good job moving from auto to program mode. well done!

Thank you Robin for this tutorial. I will try this new information soon.

What good info I will now try my P.

I agree that shooting in Program mode is much better than Auto.I have never taken any classes,but, have two personal instructors in my husband and son.Without these two guys I would be hoepless.:)
Blessings,Ruth

Janet, The Queen of Seaford said...

It is time for me to play with my camera some more!! aaahhhh--that's me leaving my friend auto!!

I have recently been fiddling with the program mode on my camera. The first day I used it was extremely sunny, but the pictures turned out great! Much better than I had expected. I've never had any formal classes, etc. I have mostly had to train myself, so this is wonderful! Thanks for the post!

Great bit of wisdom to pass on. I'll try it.

Birds and butterflies, bouquets and dragonflies... what a beautiful blog! I feel your passion. And thank you for the photo tip... as soon as I get my good camera back from the shop, I shall try it. ;)

Thank you for sharing, Robin.

It has not been a good growing season this year in Indiana. I planted lots of tomatos and they just did not ripen. The Knock Out roses were lacking in flowers.
Lets hope for a better year next year.
Debbie
Garden Thyme with the Creative Gardener

I've always used the Program mode on my Canon. I adjust the ISO but that is all I know how to do. I've never enhanced any of my photos though. I would LOVE to take a photography class to learn how to use all the other settings.
Meems

Thank you, now I need to go check out my little point and clicker!

What helpful information. I also only use the auto mode because as you said the white balance intimidated me as well. Now I know better and can experiment. Thanks so much for sharing this info.

Thanks for the great photo lesson, Robin. I'll be coming back for more -- you'd better hurry up and take the next class, ha ha!

very helpful info, and you explained it so clearly. thanks! I'll check out our camera and see if we have that capability... and hey, thanks for stopping by my blog the other day! so nice to have you visit. : )

The difference between the two photos in each case is dramatic. Great tip Robin. I haven't ever shot in program mode (I tweak a lot too) but now I'm going out tomorrow to try it out! Thanks for sharing some of your class information.

Robin, I've discovered how much I like shooting Aperture priority! it's a much better photo~~Thank you so much for explaining white balance!
Now to get into the menu and see what's what in my camera...The biggest problem, I've encountered are the terrible instructions in my manual! Thank goodness for help from blogging friends :) and online instructions! gail

Appreciate your information here on the P mode. Since my broken camera is on its way across the states to be repaired hopefully, I will be looking to buy another... can't do without one. Any recommendations?

Gosh Robin, thanks for sharing this basic info. I can only process one thing at a time and you have explained this so clearly that I think I get it! You are very sweet and generous to do this for us auto friends. :-)
Frances

This is an awesome explanation for little tricks that can so improve photography--you explain it better than my instructor did. And as always, your photos are exquisite!

Robin, so you did it! We talked about taking some lessons. And, I did not know about the Program Mode. It must be called something else on my camera but I will find it and let you know what happens.

My goodness Robin, sometimes we are so alike that it's frightening! You are one step ahead me with the camera though, I haven't tried your tip yet, but I sure will soon. I'm still stuck in Auto! I didn't take a class like you did, but have been reading photography books instead. It sounds like our home areas are very much alike too!

I use P mode a lot, and often use manual these days. I mostly leave my white balance on cloudy, but change it occasionally.
Your photos are wonderful, Robin. I especially love the ones you took of the hummingbird moth. They're hard to get clear shots of as they move constantly.
You have lots of wonderful wildlife in your yard :)
I'm glad you took some time to relax and soak up some quiet time.
Summer has gone much too fast!

I'm going to have to experiment more! Good info!

Thanks for the pointer. I will try it out. I have started to use a few different modes on my Canon but I really don't know what am doing most of the time. I do have the white balance I know and various other gadgets. It is rather like the computer. I don't know half of what I have on my mac.

Great info and explained so simply. We would all be amazed if we took five minutes and read the manual so we could actually use all the functions we paid for on our cameras. Your pictures are great!

Robin, thanks for the camera lesson. I have been getting some tips from my son-in-law and hubby. I am shooting some pics without the auto mode too!