A few days ago I was in the kitchen talking on the phone with my mom. Something hit my sliding glass doors and made such a loud noise that I screamed! I looked up just in time to see a dove fall to the patio and a Cooper's hawk right at the door swooping down to catch the dove! My scream caused the hawk to fly off very quickly leaving the dove behind. 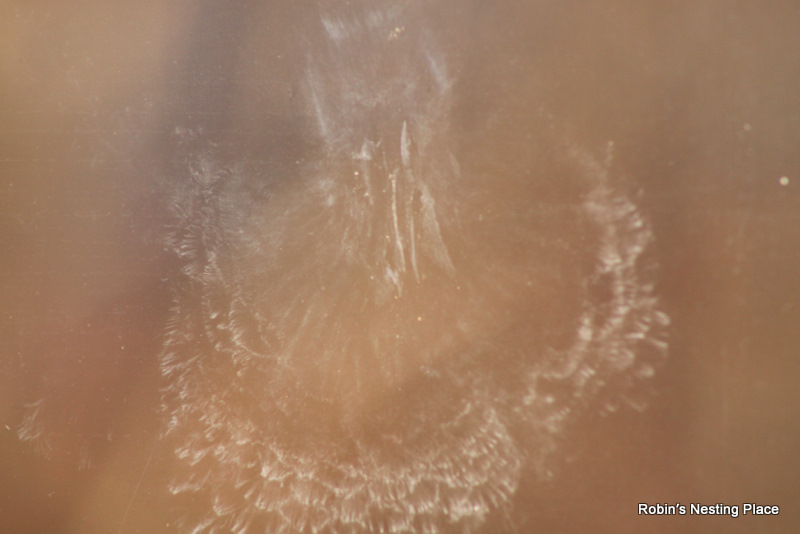 This is my sliding glass door after the dove hit. It left almost the whole impression of the dove in flight on the glass. I wish I knew what was on the feathers that caused the white powdery substance to be on the glass. Do birds have that much dander? 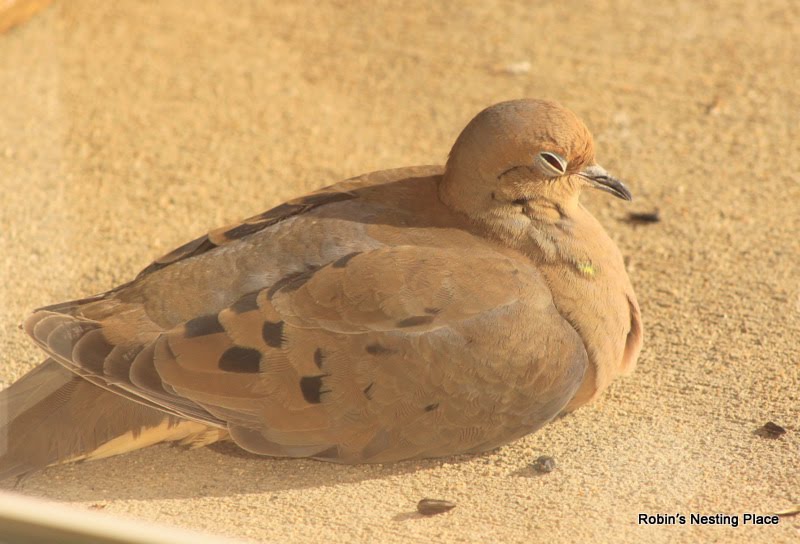 The poor stunned bird sat for the longest time not moving. I finally put on some gloves and slipped outside and stroked the bird. It never flinched. 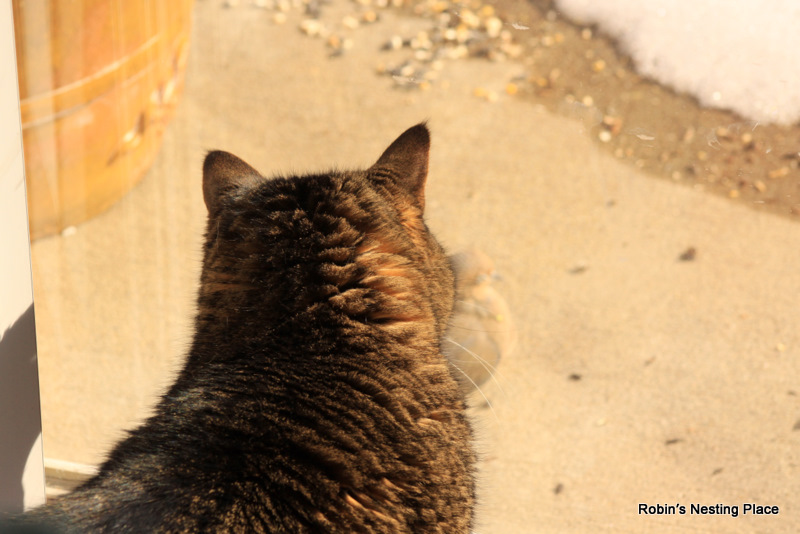 Libby sat for the longest time with her nose to the glass watching the dove. I stayed close by too keeping an eye out for the hawk. 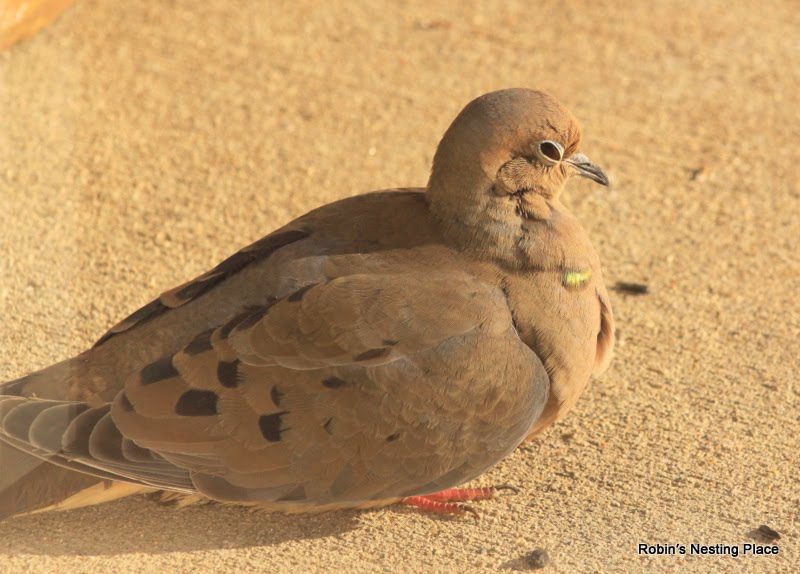 After about three hours it finally stood on its feet and turned around. It was getting close to dark and the temperature was dropping, I tried to figure out what to do with the injured bird. Not know what else to do, I decided that I would cut some of my ornamental grass and put it in a box and put the bird in the box on the patio for the night. I stepped outside with the box and the bird immediately flew away. What a huge relief!

The next day I moved the swing frame with the feeders a little farther back in the yard and closer to a tree. This is the first time that a bird has hit my windows like this. It was very upsetting, but at least it turned out well for everyone, well, everyone except the hawk!
Posted by Robin's Nesting Place at 9:46 PM

So glad to see it turned out okay!

I agree with Andrew. It's really hard to know our feathered friends are in distress!

I'm fascinated by your first photo, and can't explain it either. What a beautiful dove.

Wow...what a relief things are ok. I guess that's the only downfall (no pun intended re: the dove (!)...) to having the feeders close to the windows. I don't have that problem often either...just with that little goldfinch last year that I posted about. I hope you'll still be able to keep them close enough to enjoy taking your photos!

Birds take dust bathes so maybe it is just dust from its feathers. Poor little dove. It might have been better off if the hawk had eaten it rather than to die slowly, painfully from its injuries. Great pictures.

What an amazing success story.The imprint left by the dove is kind of pretty in it's own way,especially since the bird survived.
Blessings,Ruth

What an experience, Robin. I've had birds hit my windows as well, (the ending was different and sadder), but there was not a hawk involved. Goodness...backyard drama! How kind of you to watch over that sweet little (stunned) dove until it could fly away.

Janet, The Queen of Seaford said...

I have a neighbor who put up windsocks all around her sunroom so the birds would not hit the windows. Not sure if that would have helped in this instance.

I know it's nature's way that the hawk must prey on smaller birds, but it's still so hard to see. So glad you rescued the dove, Robin; I hope it is okay and in a safer place. We have small birds hit our large picture window every once in awhile, and I've wondered what I could do to prevent it. My windows certainly aren't that clean that they look transparent:)

Well that explains the same mark that appears on my back window. Hmmm. Beautiful photos and tale.

Gorgeous photos, and I'm glad the dove was alright. Does Libby 'talk' to the birds the way some of ours do? They tell them just what they'd like to do if ONLY they could get through the windows..

My goodness....it must have made a loud noise. The impression it left on the window is so interesting. I am glad it is now safe.

Your first picture is amazing! How painful it must of been for the bird but I'm so glad it survived.

so glad the dove made it!! Lovely shots of the dove too!

Hi there Robin, I agree about your great pics! I also agree with how upsetting this can be and not knowing what to do. Glad to hear your bird was able to fly again so quickly :-D

We don’t usually get the larger birds stunned except once we had the Sparrowhawk itself! My photos weren’t too good though :-)

It’s the odd smaller bird getting stunned that I get bothered by. If I see one I do tend to lift them as I fear neighbour’s cats that regularly pass through my garden may think it’s a meal for them! I lay the stunned bird in something like a small pond basket and place this inside a good sized (tight with growth, stems and foliage) shrub – usually my griselina. Birds often go in it to hide. I dread looking in the basket later and often the bird has died… but not always thank-you goodness :-)

Glad the dove is ok and I really liked your bird photo tutorial! gail

I hate when birds do that. It's such a sickening sound, and I feel so bad for them. I think Lisa is right, that's probably dust from the feathers. I'm glad the poor dove was ok.

That is an impressive impression on your glass, I too wonder what the white stuff is. Your bird phtography tips in the last post is great and I really don't see how much more you could improve your skills.

I had this happen on one of my windows the other day. When I went outside the birds were both gone but there were some hawk feathers and some dove feathers. We have also had robins knock themselves out this way. I am sure the dove will be ok. If it flew away it should make it.

Well, I'm glad it all turned out okay. We have flocks of hawks here where I live and they tend to stay around the beach area. It's very unsettling sometimes to even walk there.

Oh no - I've seen this recently, too. Our dove didn't hit the windows, but the Red-tailed Hawk nailed her right out in the meadow at the top of the garden. I found only a pile of feathers from the attack as the hawk flew off with the body. It's such an impact and so swift.

Glad you dove made it.

Back in September, a white winged dove died after crashing into our patio door. It made me very sad and I posted about it on my blog at Houston Grows (before I started my Blogger blog). I'm so glad your dove recovered.

My husband found a beautiful male cardinal at the bottom of our big picture windows in the breakfast nook. He said he heard a loud thump the previous evening. Your story turned out much better. The cardinal didn't make it.

Gardening in a Sandbox said...

Hi: We had a dove smack into the kitchen window last year. I made a huge bang. We were left with its imprint on the window. My husband took a picture of it. I went outside but could not find the bird. Sometime the glare from the sun on the window confuses them and they fly into them. I guess that is my excuse for dirty windows. I just love your bird pictures. I wish I could sit with you to learn how you get them. Wishful thinking. I will keep practising. Valerie

What wonderful photos and such a touching a story. There's something so hauntingly beautiful about a mourning dove.