A few weeks ago I spotted a Wild Birds Unlimited on my end of town. I finally had a chance to stop in and browse yesterday. When I told the helpful gentleman that I had never been in before he playfully wanted to know why not, that they had been there three years. I told him that I'm just now getting birds, and he knowingly asked if I was in one of those new subdivisions that had once been a corn field and had no trees. How did he know? Well, that's pretty common here around the Indy area.

Anyway, I loved the store and could have spent a fortune, if I was prone to do that sort of thing, but I'm not. I just bought a thistle sock, bird seed and since I am always a sucker for books I bought this: 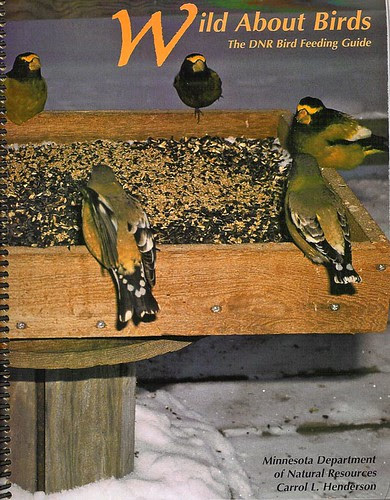 I loved it! I read the whole book last night and it was very interesting and informative. I didn't have a book on Midwestern birds and this one was my favorite of the birding books they had in the store. It had great pictures of each species with important facts and the feeding habits of each one. It also has a section with simple woodshop designs for bird feeders. I had been wanting something like this for my son. 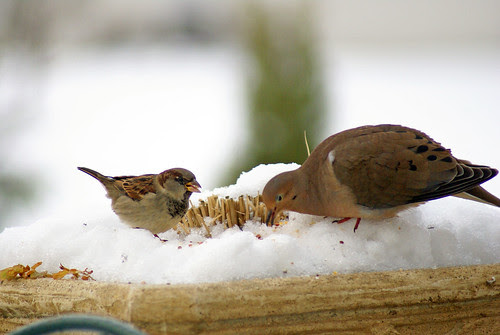 One of the things I discovered while reading the book was how harmful house sparrows can be to other songbirds. They aggressively seek out nest boxes that are occupied by wrens, bluebirds, chickadees and tree swallows. They attack the adult and baby birds in the nest by fracturing their skulls with their sharp bills.

I have mostly sparrows coming to my feeders so I've been buying the cheapest bird seed which has not been a good thing to do. They like cracked corn and millet which is in the cheaper seed mixes. They don't particularly like black oil sunflower seeds or thistle. I bought the cheaper food because they were scratching out the sunflower seeds and there was so much waste. So, now I have to make a decision, stop feeding altogether until they move on, or just buy the expensive seeds and hope they move on. I love seeing the other birds that are finally coming to my feeders, so I think I'll fill the other feeders with the better food and use up the cheaper seeds feeding them less and less until it's gone. 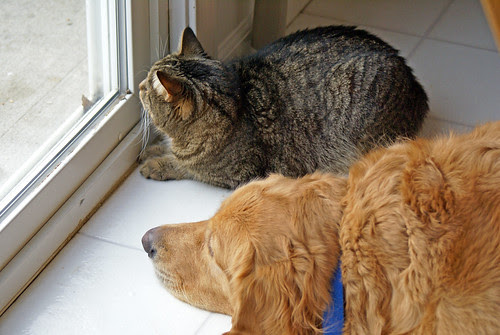 Besides, they are providing great entertainment for Libby and Lilly. Every day, all day long, the cat is perched in front of the sliding glass doors watching the birds. I've read that indoor cats will live longer if they have some entertainment, otherwise they get depressed and bored and have shorter life spans. It is so cute to see these two beside each other in front of the doors. Today Lilly got just a little too excited when a dove came right up to the door within inches of her nose, she jumped up barking and nearly trampled poor Libby. 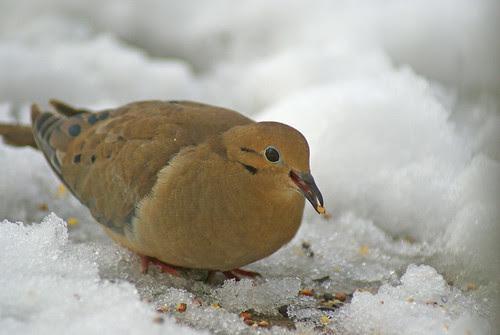 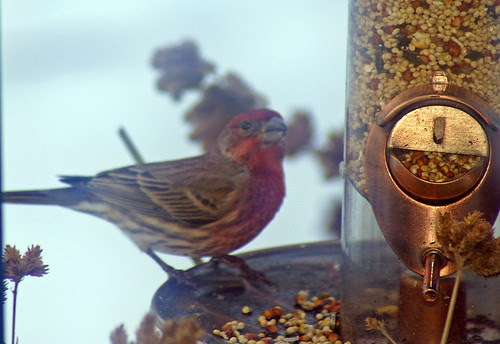 Here is a purple finch, (correction- house finch, thanks Lisa)at the feeder in front of the family room window.

Speaking of the Cooper's hawks, I saw two of them today giving chase through my yard and then swooping down in several of the neighboring yards. I wasn't fast enough with the camera to catch it. I don't think they caught anything.
Posted by Robin's Nesting Place at 7:06 PM

Goodness! I had no idea the sparrows were so aggressive. Makes me rethink my bird feeding habits. We have a Wildbirds Unlimited & I used to use their "Supreme" mix but also had a lot of mess with it. I've been trying a "mess free" brand but it costs more. Good luck with your birding hobby!

Robin... the WBU on my side of town closed a year or so ago, I think. I confess I was not a regular customer. I've lived around here my whole life, but really don't know much about the birds. Someday, I'll have time to study them more and figure out how to attract different kinds of birds to my feeders.

WBU can be expensive, I get all my sunflower seeds at Walmart! I was waiting to here you say that the people at WBU had been following your blog! LOL! Those english sparrows can be bad! Watch them but if you have them, I doubt they will move along!

Hi, Sheila. From what I read in the book, it is only the house sparrows that are so aggressive. The other sparrows nest on the ground and are not a danger to songbirds.

Carol, most of the birds here are the same that we had in Alabama. I had several feeders there and kept a list of all the many species that frequented my feeders.

Mon@rch,it was expensive, but they had really nice quality things and a selection that most places don't have. For feeding birds, it wasn't worth the price to me either.

Robin those house sparrows are pesky critters. It is too bad they are so prolific. I found a red-breasted nuthatch dead in one of our bird baths. I think the house sparrows killed it. I don't know this for sure but I had seen the HOSP pecking at the RBNU earlier.

I hope you have a field guide of birds. I want you to take a good look at your picture of the bird you think is a Purple Finch. This is really a House Finch. The difference being the House Finch has all that streaking along the sides. A Purple finch doesn't have all that brown streaking. Its red does go down the side further. Purple Finches are more chunky looking. You will be able to tell when you have a Purple Finch becasue you will wonder why that House Finch is chunkier and redder looking. The females are a little more difficult to tell. To me the most noticeable thing is the whitish stripe over the eye on the femal Purple Finch. I hope this helps you. As I say if you have a field guide it will show the difference and explain it better than I can.

I am not saying you won't have Purple finches. This year is a good year to watch for them because it is an irruption year for northern finches.

I know what you mean about shopping at WBU. I love to go in and see what kind of gadgets they are selling. Plus once you master your yard birds I bet you will venture further and look for more interesting birds. It is like a treasure hunt and when you find a bird you have never seeen before it seems like a priceless treasure.

Last year for christmas my sister requested a BIG tube feeder. Well, you know I found a HUGE tube feeder at WBU. It was almost a joke but she uses it and appreciates not having to fill so often.

Great shots inside and out! I have some birds but need to work a little harder on attracting more. A good goal!

Great close-up of the dove (and the woodpecker from yesterday's post). Shat fun to be able to watch them so closely.

Lisa, thanks for the bird ID correction. I do have a few bird field guides but they have drawings instead of actual pictures and it is so hard to tell them apart sometimes. I got on a few bird sites and had difficulty telling them apart from that also. I went to the library tonight and found several bird books with better pictures and it is definitely a house finch. It is actually easier to tell by the female than the male and I had a pretty good picture of her.

I love WBU just for their feeders (well, for everything they tease me with). I buy nuts and seed occasionally, but I like Lowe's home store for seed. Black Oil Sunflower is what my birds thrive on - it attracts the chickadees, nuthatches, wrens, titmice, cardinals, etc.

Regarding house sparrows, I see one visit now and then but they don't stay. I think it's because I don't feed what they want - millet. They are not wanted here because of the reasons you stated. I'd love to put some bluebird and wren boxes in place over the winter. So I would rather see the house sparrows reside at the grocery stores.

I'm a beginning birder, too, and have learned so much during this past year of blogging. It's a great community to talk to. And, hey, I claimed to see a male purple finch twice during the past year and I was dead wrong! Wishful thinking, I guess - it was a male house finch. I have a good sense of humor. We all have fun learning.

Robin,
Just happened upon your blog. Thanks for the nice things you said about WBU and recognizing the quality.
You have some fabulous photos. Keep up the good work.
Nancy (WBU Saratoga Springs NY)