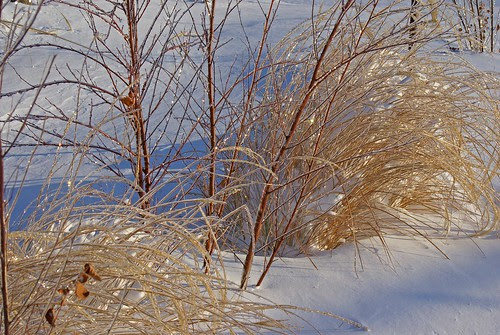 The freshly fallen snow was beautiful this morning, but the ice on the plants was even more beautiful to me during the brief time the sun came out. It was very windy though, with gusts of up to 40 mph. I don't think anything was damaged from the ice, but several times I held my breath as the ice covered branches crashed together. It actually sounds pretty hearing the iced branches and grass hitting together, very much like wind chimes. 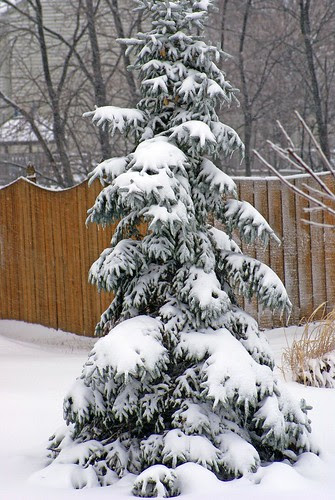 There were so many differing snow accumulation predictions yesterday, it was difficult to know what to expect. Thankfully though, as I said before, we were on the low side of the predicted amounts. 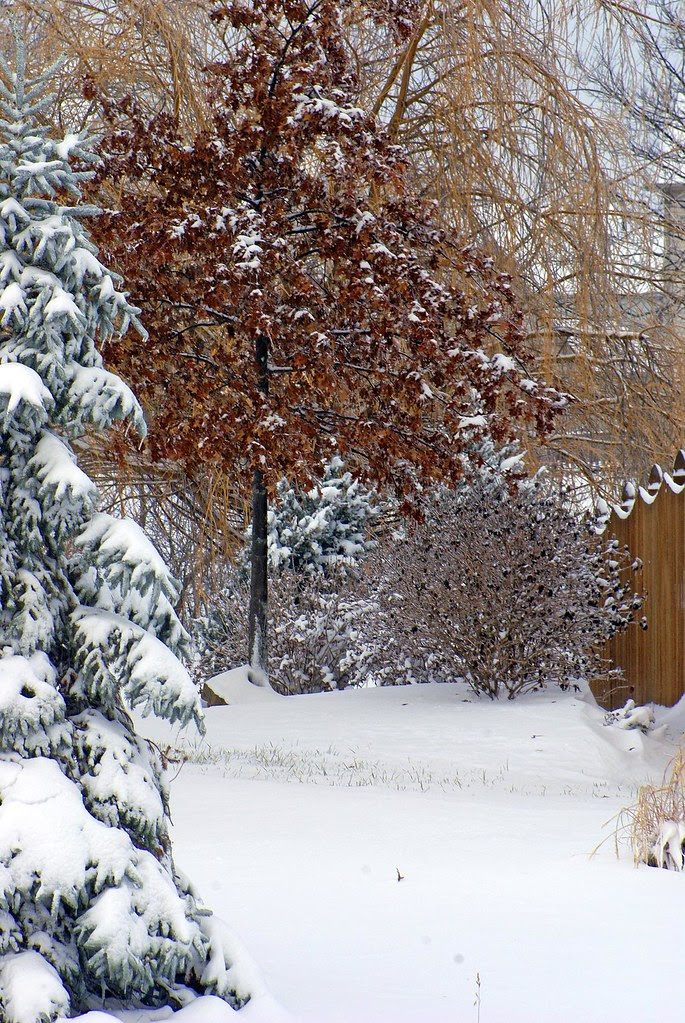 View across the street. 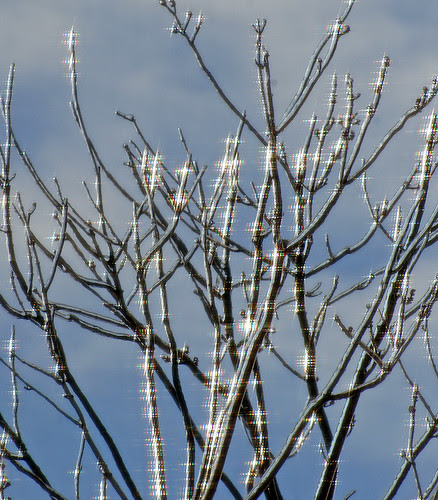 During a short period of time today the sun came out and I can't even describe with words the beauty I beheld. The pictures also don't capture the magnificent beauty. The wind was blowing so these pictures aren't clear, but you can see how the ice sparkles on the branches. The shiny spots on the pictures, were glistening with color reflected from the sun. It rivaled the beauty of the frozen fog. 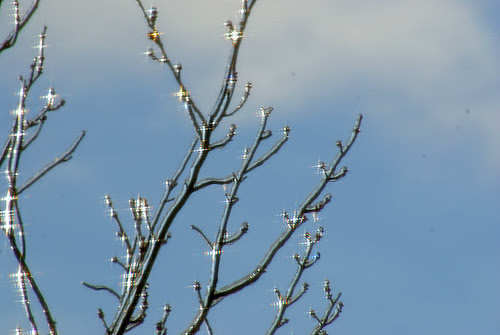 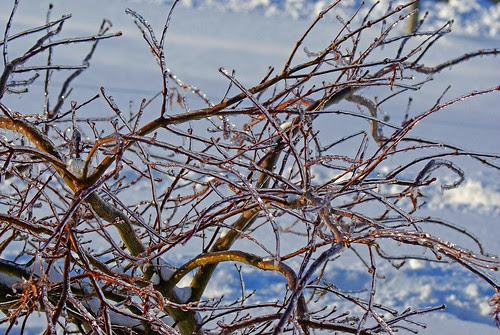 The Japanese Maple, covered in ice. 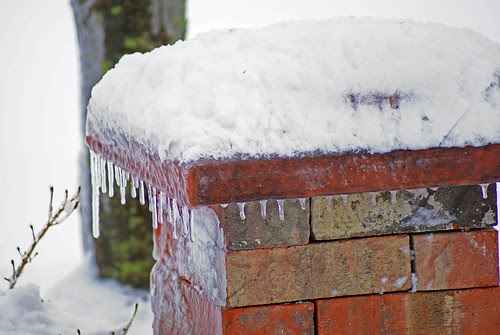 The birdbath was covered with snow and ice. 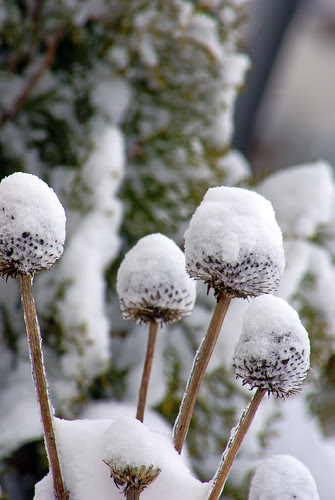 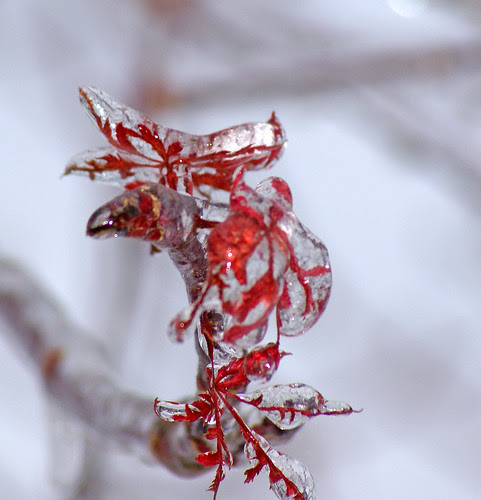 The only leaves left on the Japanese maple, now encased in ice. 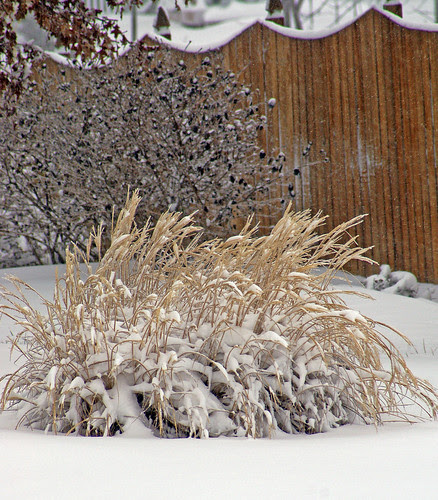 I love the way grass looks in snow. These are directly across the street from me.

It was nice not having to get out in the snow and ice, and we enjoyed our day of rest together. I had so much fun birdwatching today and have quite a few of those pictures that I'll post tomorrow. I'm beginning to enjoy winter more, but hearing my parents talk about how warm it is back home in Alabama, makes me just a little homesick.
Posted by Robin's Nesting Place at 8:21 PM

Robin, I just love the ice and snow pictures. Aren't icicles pretty even if they are short? The spruce (?) tree is really gorgeous with the flocking of snow.

Beautiful, beautiful pictures! Great that you could capture the sparkling sun. Do you have a new layout of your blog? I like the colors!

You've captured some truly lovely images, Robin. I can imagine that Alabama sounds quite nice right about now, but at least you have the beauty of your garden to keep you warm!

Robin, I can see you got much the same as we did. I don't know if we'll see such beautiful images the rest of the winter. In a way, I hope not, but if we have to have winter, you can't beat this!

Icicles are indeed pretty. Although now that it's warming up I'm seeing things falling from the roof, that could be dangerous.

Hi Bek, I do have a new layout. I changed it up a few days ago. Thanks for your kind comment!

Thanks for stopping by, Nan. It can be difficult when one is used to mild winters.

Kylee, it is pretty isn't it? Although I could be content not seeing any more until next year too.

We don't have snow but this morning we have had some serious frost overnight and my garden looks magical too.

I enjoy seeing winter in the garden but I hate driving in snow and ice. Take plenty of photos Robin as we all enjoy seeing them :-D