With these new leads and a possible location, Robin began scouring the internet for contact information. With each name found, she would go to Facebook and search. Many hours were spent trying to find some connection to them. Finally, on December 18, on a people search site, she found someone with another brother's name, N.M.  The site listed several family member's names along with his. Thankfully, one of them had a Facebook account that was easily accessible. A quick scan through the "Friends" list revealed a K.M, the very same K.from the My Space pictures!

Robin sent the Facebook link to Diane. Overwhelmed with so many emotions, Diane sent a private message to K. After not getting a response and determined not to lose this opportunity, she took the risky chance of posting a few pictures on his wall. 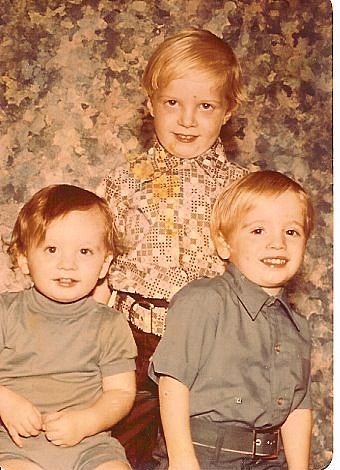 One of those, was a picture of three little boys. The picture of him with his older brothers was familiar, and removed some of the doubt he had. He sent a response to Diane and they arranged a phone call. For the first time in her life, at 52 years of age, she spoke to her brother. As soon as that conversation ended there was a flurry of activity on Facebook with family connecting for the very first time.

Robin had to wait a couple of days to make her call because all she could do was cry every time she thought about talking to her brother. How wonderful it was for her to finally hear his voice and talk to him after all of these years. Emotions are still very raw and conversations with the other two brother's are waiting to be had, (they don't do Facebook). It will happen in time. There is so much for them to process.

This is where the story gets even more complicated because it is not mine to tell. So it must be told with great care out of respect for the brothers, their mother and the new relationships. (The fact that I am not a story teller or writer also complicates the matter greatly.)

K. was quite stunned to get this message from Diane and he was very confused! For you see, they had never known anything about their father or his whereabouts, the M. family or the name they carry, least of all, the fact that they had three older siblings. That thought had never crossed their minds. Their mother had refused to speak a word to them about it.

It has been shared that these boys grew up longing to know their father. They had a very difficult childhood and many are the emotional wounds they bear. It seems that they have gone to great lengths searching for their dad, and like the searches for them, they always came up empty handed. The impenetrable secrecy and unanswered questions have haunted them their entire lives.

From the responses read and heard, it is known that many prayers have been prayed over the years, both for them and by them, for answers to their many questions so that their hearts could be healed from the scars and wounds of childhood.

While the members of the M. family are thrilled that K, N, and A  have finally been found, the real Christmas miracle is theirs. It is not by chance that these boys have never been forgotten or that family felt compelled to find them. No, they needed desperately to be found, and to be told that they had family all of these years that loved them and had searched for them! They needed to know that they were never forgotten.They needed to know about their dad and they needed closure and healing.

To be found was a "Christmas Miracle" indeed!

We are so thankful for this opportunity to get to know our brothers and their families. Plans are already being made to see each other face to face. My brother Mike is very sick with his cancer and treatments and our three brothers are very anxious to meet him and offer him encouragement. If I can't make it down to Alabama when they go, they plan to come here to see me on their way back to New York. I look forward to seeing them face to face!.

While our parents, (whom we all love dearly),  made some very bad choices that hurt us deeply as children and even as adults. We are moving forward and, with God's help, we will allow good to come from their mistakes.Uniting this family somehow rights at least part of the wrongs.

Thank you for reading our story!

I hope you all have a very Merry Christmas!
Posted by Robin's Nesting Place at 10:14 AM

Wonderful!!! I know that this story is still unfolding, but what a beautiful example of reconciliation and forgiveness. I can't wait to read future chapters.

May you and your family have a most blessed Christmas weekend, Robin. May the joy of the Lord fill your heart and home.

What an absolutely beautiful gift of love for the holidays. A family. I'm so happy for you.

You know God had a hand in all this! May He grant you all a new found PEACE this holiday season. Blessings to YOU and thank you for sharing the miracle of a loving family.♥♫

This is wonderful..there is a story of similar details in my Mother's family..maybe I will write about it in time. Sometimes the human story is so full of tragedy and hope..thanks for sharing

Thank you for sharing this touching story and may God grant all of you healing and comfort.I am so glad there is a happy ending!

Love,peace and joy to all of you!

What a story! I can only imagine what a range of emotions this has all brought upon everyone involved. I hope the entire family has a very Merry Christmas, and many joyous times together in the New Year.

Thank you for sharing your story of restoration to your brothers. I cannot imagine your joy! It has to be the best gift ever.
Merry Christmas to you and your
family.
Carolyn

Gardening in a Sandbox said...

What a roller coaster rider but what a wonderful ending. I am so happy that you are all going to be reunited. It is the best Christmas present. V

I do pray that much good will come from this. God has away of turning something not so good into something wonderful. I hope this is one of your best Christmases so far.

What an awesome story! And the best part is it's true! Christmas blessings to you all. God is so good.

What a Christmas story! I can only imagine the emotions you and other family members are having. Merry Christmas, and may you have a wonderful, blessed New Year!

Glad you shared this wonderful story. Merry Christmas to you.

I wonder how many other people like these there are who are wondering where their family members are.

Robin, I had a little trouble figuring out who was who. I'm thinking you are one of the children from the second family. Is that right?

wow, robin...how amazing. this is so wonderful. thanks for sharing it. i will keep you and your family in my prayers...for reconciliation, healing, understanding and peace. i'm looking forward to future postings.

Ahhhhhhhh what a perfect gift.. Enjoy every second of this wonderful adventure.. hugs and Happy, happy new year..Cherry

This is a beautiful story of determination and the bonds that tie us all together. Having not visited your blog for a while, I certainly didn't expect tears as I read these last few postings. A Christmas miracle indeed. Cherish every moment.

Just now reading this Robin. A miracle indeed. I'm still processing the story and may re-read it. It is deeply moving. What a Happy New Year, eh? XO