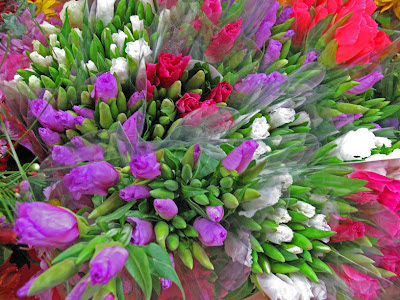 The headline in Sunday's paper read, "Flowers Boost Morning Moods". Apparently there was a mood research project that was conducted by Harvard University and Massachusetts General Hospital. The result of this mood study showed that the majority of people are least positive in the morning. The article, by NewsUSA in Sunday's Indianapolis Star, goes on to say that those in the mood study "reported being happier and more energetic after looking at flowers first thing in the morning". 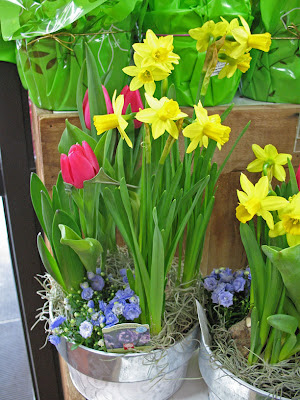 Dr. Nancy Etcoff, who was the lead researcher, reported that when even a small bouquet of flowers was introduced into the morning routine of those in the study, it caused them to perk up, giving them an emotional boost that lasted throughout their day. 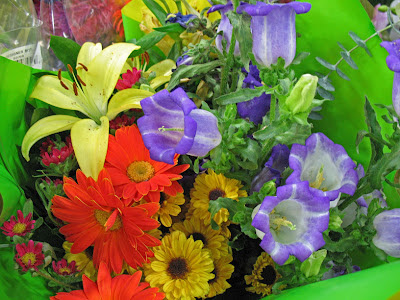 In the book, the Hidden Art of Homemaking by Edith Schaeffer, she addresses the importance of having fresh flowers in the home. She said, "In Holland fresh cut flowers were generally considered a necessity." She said that even the poor people put aside a guilder or two for fresh flowers every week. She also recalls that her high school principal always started the daily assembly by reciting, "If you have two loaves of bread, sell one and by a lily!" She said that the kids would often giggle and scoff at the statement, but later she came to appreciate it because she realized, "the bread becomes a different thing when eaten at a table with a lily in the center. 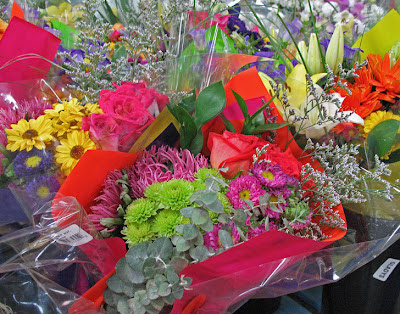 Yolanda Elizabet at Bliss, is a wonderful example of someone who attempts to have flowers in her home year round. I loved the post she did on flower arranging. The best thing about her flower arrangements is that they come from her own wonderful garden. 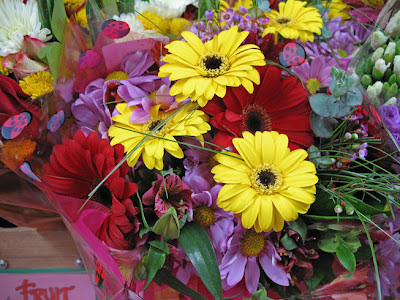 I know for me, even looking at pictures of beautiful, colorful flowers on gardening blogs is a mood lifter. So, I hope these beautiful bouquets perk you up and give you an emotional boost today.
Posted by Robin's Nesting Place at 10:00 PM

I agree, if you see flowers in the morning, the day goes much, much better. I should stop each Monday morning and buy a few cut flowers to put on my desk at work. I usually take some in from my garden in the summertime. I'd probably appreciate them more in the wintertime.

Your pictures were beautiful! Makes me think of spring. I know I feel better when I have fresh flowers in the house. Sometimes, I even move them from room to room with me!

I think thats why we gardeners are such a happy bunch...if we aren't looking at flowers, we are thinking about them!

You gotta wonder who pays these people to do research on things any gardener could tell them. Glorious photos made me feel better, even! I am currently without freshcut flowers, but there are quite a few things blooming in the house, so thatis a help. Next time I go to town I will get some flowers for the kitchen vase, probably tulips or freesias or alstromeria. (can't spell tonight but you know what I mean!)

Robin, I just have to say, "Well, duh!" We knew this, didn't we? And wow, those pictures are wonderful.

My pen pal from Switzerland (that I've had since we were both 11!) says in Switzerland if someone doesn't grow flowers outside their house, they consider them to be lazy. That's how important they feel they are. Interesting, isn't it?

We seldom have cut flowers in the house, the cats eat them or will try and get to them ceaselessly if placed high up. Your photos always improve my mood, thanks for a steady stream of happiness!

I keep a bouquet on my table all the time and it's a huge happiness booster for sure! Love these beautiful photos Robin... thanks for sharing them.

Robin the local florists will appreciate this post as much as I do. :) The beautiful pictures make me want to run out and purchase some lovely blooms to perk me up.

Just working in the garden some yesterday made me feel better. Nothing like a shot of fresh air.

Carol, I think that would be a wonderful way to start off Monday's.

Hi, Beckie, welcome to blogging! I've taken fresh flowers from room to room with me too.

Vonlafin, I think so too. I even dream about them.

I know, Jodi. I thought that too. I wondered how much that study cost them. The tulips I saw today were so pretty, I don't know why I didn't get a picture of them too.

Too funny, Kylee. I couldn't have spelled it correctly myself. That is a, "duh", isn't it?

Frances, my kitty loves the flowers too. I did a post once with pictures of her nibbling on bouquets.

Your welcome, Jayne. You seem to be the type of person who takes immense pleasure in nature, whether birds or flowers. Good for you.

Lisa, glad you were able to get out and work some. I can't wait to do that, it's still to cold and wet here.

I wish I could have cut flowers, but I am allergic to mold. :^( Occasionally, I succumb to their lure & keep a few in the house for a couple of days. My mold allergy sure makes things hard for my husband - he always has to get creative when he want to get me some small mood lifter.

I hope you didn't think I meant "duh" about the spelling thing!! I meant about the mood lifting thing that we gardeners have known for a long, long time! :-)

Oh, Kylee, I just reread what I wrote and it did sound like I was referring to the spelling. I knew the "duh" was for the study. I was responding quickly and didn't make myself clear. That is not your fault but mine.

Whew! I sure wouldn't want anyone to think I was snotty. I try to keep that part of me private. LOLOLOL.

That rings true to me. I find zen in gardening!