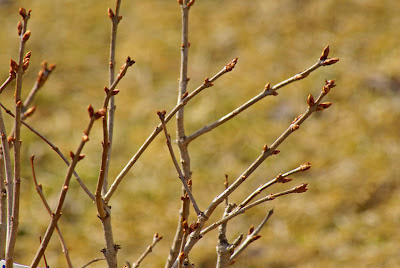 Today the sun was finally shining and even though the ground was still quite wet, I ventured outside and did a little gardening. Being from the south, I never would have thought that the upper 40's would feel warm to me, but it was glorious compared to the weather we've had lately.
First, I took a walk around to check things out. I had planted lilacs last year and they seem to be doing well and full of buds. 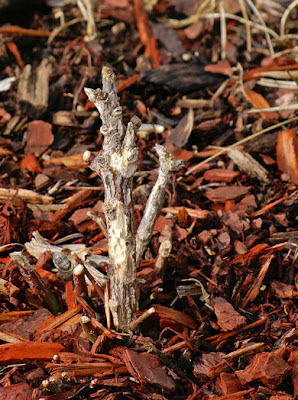 The Burning Bush, (Euonymus alata "Compactus"), hasn't fared as well. It seems that this shrub has been the favorite snack of the local rabbits. There isn't much left at all of this one. I'm not sure it will even live after having so much of it eaten. 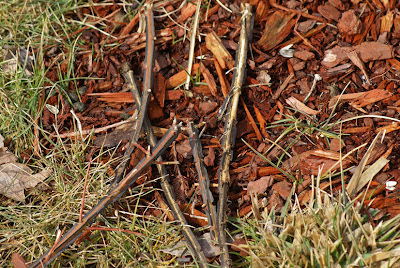 The frustrating thing is that they just chew off the branches, it is so sad to see them chopped off and laying beside the shrub. 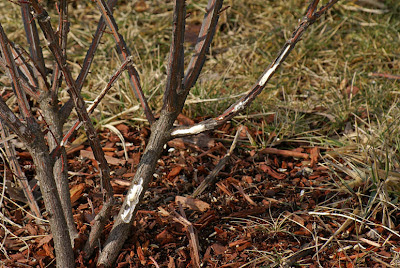 This one has major damage too, as does the third one in the grouping. I think next year I'll wrap them to protect them, that is if they even survive this winter.

I wanted to make sure that I had Verbena in the garden this year, so I went out today and collected just about all of the dried flowers, (thankfully I hadn't cleaned them up in the fall). I brought them inside and tapped them on a paper plate. I used a sifter to sift out some of the chaff and I was left with what I hope are the seeds; they are so teeny tiny. I winter sowed them in container number 16. I took some of the seeds to other parts of the yard and sprinkled them around. I still have quite a few seeds and will winter sow more in the next few days. I'll probably have Verbena everywhere, I hope so anyway.

Last year I attempted to create compost by using a plastic trash can for my waste. It wasn't particularly successful, but I didn't do things exactly as I was told by my friend. I didn't keep it watered, I didn't use straw, and I didn't roll it. I saved my straw bale from my autumn decorations and had it on the side of the house. Today I put some of the straw in can number one along with some coffee grounds, and kitchen and yard waste. I'll try to do a better job of watering it, but I still won't roll it. Hopefully it will produce better compost this time around.

We have another cold front moving through tomorrow and by Sunday it will probably be back down in single digits again. I'm so glad I was able to get outside and play a little today.
Posted by Robin's Nesting Place at 11:36 PM

That is exactly what the rabbits did to my burning bush!! It wouldn't be so bad if they ate the branches, but the varmints just chew them off and leave them lay! I planted some new ones this year and put fencing around them, they still seem OK. I am keeping my fingers crossed.

It looks as if you've got a beaver on a rampage with the Burning Bush. I didn't realise rabbits did this sort of damage to trees. Grrr... no wonder MMD has rabbits listed as public enemies!

I hope your Verbena seeds produce as lovely flowers as the ones from last season did!

I think rabbit stew might be in order, Robin...wascally wabbits!

So glad you could get outside. Isn't it amazing how warmth is relative, even in our warmer clime a day twenty degrees above the last will feel balmy. Rabbit stew, yuck, rabbits, just go away!

I have a trash can composter that looks just like yours. It gets too heavy for me to roll it. We stop adding to it after the first heavy snowfall because we can't get to it. I don't get compost every few weeks. In the spring we dump it over and the bottom 1/3 - 1/2 will be rich compost. We shovel everything else back in and start over. I use the can mostly for kitchen waste and cover with grass clippings and leaves that we save nearby. I do sometimes get a mouse or two but being so far from the house it hasn't been a problem. When I don't have leaves or other brown material I add shredded newspaper. I have a compost pile for garden waste. I hope we both have better luck this year! I may try making a second can so that one is only half full. Maybe without adding new stuff and if it is light enough to roll it will work better.

Oh yes Robin, the buds are so promising. Isn't it wonderful to get out and about today?? We too are expecting temps in the teens tomorrow. Brrrr I just want to savor every minute of this fine winter day.

Chickenwire is your friend in winter - encircle & cover your small or young shrubs - it keeps the rabbits at bay.

Verbena! Can't have enough of it.

I hope it warms up for you, Robin. Even though it's February and we expect teens, it's tiring.

Sun is always needed and I am so glad your plants are doing well! Watch those critters!

The rabbits got our E. alatas last year, too. Just like yours. They did come back but they never got to the size of the two that they passed over. This year we put half-barrels around them. My husband brings them home from work. He cuts them in half and also cuts the top and bottom from them. They're tall enough to keep the rabbits out.