Much To Be Thankful For Today 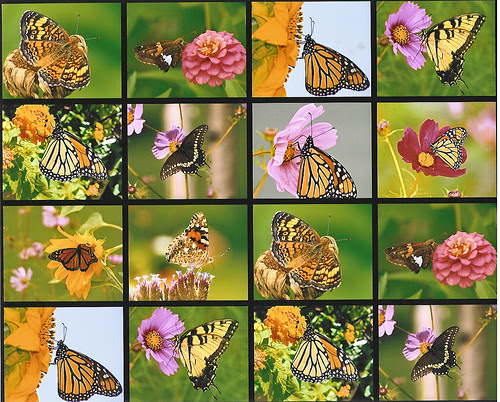 I was on my way out the door today to go to the nursing home to see my mother-in-law, when the phone rang. It was actually a call from the Director of Activities at the nursing home, who had a few questions regarding her f-i-l who was just diagnosed with dementia.

While on the phone with her, my son, who was downstairs preparing lunch, came and told me that there were sparks in the oven. I went downstairs and opened the oven door and the heating element was on fire and it was spreading to the bottom of the oven! I quickly got off the phone and pulled the oven from the wall to unplug it. I moved the island and the kitchen table and pulled the range to the sliding glass doors, it wouldn't fit and the fire was spreading. I had my daughter call 911 and I grabbed the flour and threw a hand full in the oven, causing it spread more. I then remembered that we had a small fire extinguisher somewhere in the pantry. I had never used one before and had no time to read the instructions. Thankfully, I figured it out without difficulty and put the fire out. About that time, the police pulled up, and a couple of minutes later the fire department came with two trucks and a rescue unit. They quickly reassured me that the fire was completely out and they graciously moved the range to the garage.

I was pretty shaken, having seen once how quickly a kitchen fire can spread, but other than a ruined range and some difficulty from breathing in the smoke and chemicals from the extinguisher, we came out of this one pretty well. I'm so thankful that I had not yet left the house, the outcome might have been far different.

It is pretty shocking that a heating element can get so hot that it splits into and completely disintegrates as it burns. Scary.

So, I guess I'll be getting a new range now.

Oh, and the above picture has absolutely nothing to do with this post, other than it was one of my first attempts and creating a collage. I still have difficulty doing that on Adobe Photoshop Elements and need a lot more practice, but it's fun to play with.
Posted by Robin's Nesting Place at 12:25 AM

So glad you and your family are all okay - that must have quite scary for you all!

I love your collage, I really enjoy doing them too :-D

You did good. I'm very happy for you that it was no worse...

How scary and the thought of how close you were to being gone, what would have happened...but thank goodness you were quick thinking and there. So frightening.

Your collage is beautiful. How do you do that? I have seen this on other blogs.

Thank goodness it all turned out OK!
How long did it take for your heart beat to slow down?
We've had a few fires and they can be so scary. Good thing the quick thinking on your part saved the day.

A scare like that really makes you appreciate the normalcy of daily life. So glad that you, your family, and your home are safe. As for the photos...if the butterflies made you smile after a scare like that~they did their job.

Oh My Gosh! What a harrowing ordeal! I'm glad you were able to think clearly and not panic. That truly is something to be thankful for.

Robin - Let me add my voice to the crowd, I'm glad you are all well.

Robin, cool heads prevailed! Glad you all are alright. It is scary to think of the "what ifs". But we have to put our trust in God and live our lives as normaly as we can.

I'm glad that you were able to get the fire under control. It must have been frightening. Your photocollage looks great!

Boy - that sounds like quite the scare - and a lot of work on your part to try to prevent a catastrophe. Like Lisa, I'd have tossed some flour or salt on it and run after calling 911. So glad you and your family are safe.

The collage is beautiful. Not in my repertoire of skills, so I can really appreciate the hard work you put into it.

Boy - that sounds like quite the scare - and a lot of work on your part to try to prevent a catastrophe. Like Lisa, I'd have tossed some flour or salt on it and run after calling 911. So glad you and your family are safe.

The collage is beautiful. Not in my repertoire of skills, so I can really appreciate the hard work you put into it.

OMG - we are all thankful that you are safe! What a nightmare. Indeed your quick thinking and good timing saved the day, and we are thankful.

I'm amazed by your Photoshop collage and am determined to try that. I may be in touch very soon!

Robin, Happy to hear you are all okay after that fire. Close call, indeed. Luckily, you called 911 and remembered that fire extinguisher.

The photo sure got my attention but wow, what a day you had! I am very thankful it wasn't worse than it was!

As a fellow kitchen-fire survivor, I can say wow, what a lucky break that you were able to catch it in time! Makes me want to run to the kitchen right now & check my oven and check on my fire extinguisher. It's hard not to be paranoid after having had a fire. BTW the collage looks terrific.

My Word!! I was all happy with the butterflies flitting about--and then whoa--a major fire!! I nearly ran out the door to help--but then I saw how beautifully you handled it. I have a fire extinguisher too and I've used it twice. Once our grill was on fire and the other was the cord to the AC unit in our old home. I don't think that being in the right place at the right time is coincidence always---I than the Lord you got delayed. Hugs to ya-- I know it was scary.

Wow Robin, how scary! I'm so glad everyone is okay!

Oh dear, I hope your heart rate has returned to normal! How scary for you, but it could have been so much worse, I suppose.

Your butterflies are beautiful!

Robin, I just read about your fire and the fright of it all. I thank the Lord that you were able to put it out and that you didn't really hurt yourself pulling it out of there.

The collage is gorgeous!!! I wish I knew how to make one.

That is scary! I am always worried about my dryer, I guess that I should add my oven to the list!

What a scary story, but you obviously handled it with aplomb. And that's a beautiful collage, by the way.

I am so thankful you are all ok Robin! What a scary day! Praise God for his loving hand of protection over you!
~Jen Unsell

I am glad everything turned out ok and you and your family didn't get hurt. Fires can be very scary, considering how fast everything happens.

Dear Robin,
My goodness, glad you and your son are okay. How frightening! Fire is quick. Now for the clean up.
So grateful you were a quick thinker and could pull the stove out and unplug!
Your collage is lovely. Hope remembering the butterflies and the calm days of summer helps to quiet the heartbeat.
Sherry